Our pulleys are designed with the best materials and manufacturing methods available today.

The reason why we started manufacturing pulleys back in 2004 was that we were sick and tired of the squeaky belt noises due to the poor designs of other manufacturers.  Other manufacturers didn’t seem to care as long as their pulleys looked shiny.

The belt hiss may not seem like a big deal but is caused by micro slipping of the belt due to the surface of the pulleys. So, our engineers got to work to eliminate the belt hissing noise.  It took us good two years of research and development to come up with our totally silent design.

In that time, we have developed the “ASST – Advanced Squeal Suppressant Treatment”. We treat the surface so that belt has over 200% grip compared to non-treated surfaces, which in return eliminated the hiss altogether while creating a sophisticated look we aim for. 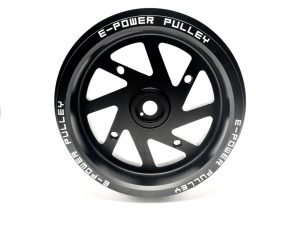 The material was chosen to be A6061-T6. We had tried from softer material A1000 class- A7075-T6, but A7075-T6 tested to be just too hard and it ended up cracking in the long-term tests. Softer materials didn’t hold the abuse, either.

A6061-T6 was chosen as our long-term tests showed to be the most durable material. ASST surface treatment consists of 3 steps, which is our trade secret. Our anodizing duration is longer; thus, colour is deeper into the aluminum surface, creating a thicker strong oxide layer that can take the abuse. Unlike other manufacturers, our colour won’t get removed too easily and will last longer.

With the lighter weight material, on average fuel consumption is decreased by 10-15%.

If you are looking for the best pulleys for your car, the Rocket Factory pulleys are your answer.